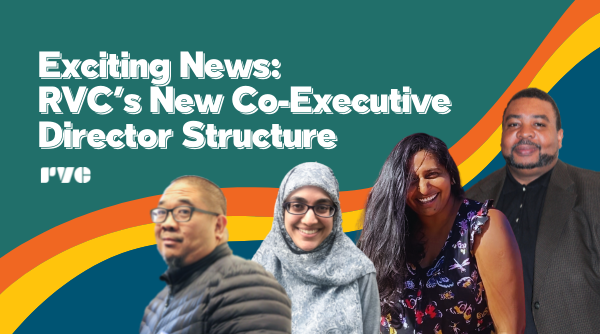 This is it. The moment we’ve all been waiting for since Vu announced his retirement three years ago. WE HAVE A NEW EXECUTIVE DIRECTOR STRUCTURE!!!

I know you all have been waiting breathlessly for this announcement…wait, you didn’t really notice?  Because our programs just kept being awesome during this multi-year transition time?

Perhaps you didn’t notice because we’ve been intentional about distributing power and decision making across for RVC for years now. We decided to become a fully self-managing organization, and have taken that seriously. As the interim executive director, I haven’t been trying to do the impossible ED job for the past two years; I’ve been coaching and supporting other staff to make important decisions themselves by implementing the advice process of decision-making.

This new structure is the next step in our evolution as a self-managing organization. When I first joined RVC as managing director, we essentially had a secret co-executive director structure: while Vu handled fundraising and public speaking, I was the decision-maker regarding all things program and operations related, including staff supervision. In that role, I immediately began working to distribute power, and it’s been a steady progression to get to where we are now. Since Vu retired in late 2019, I served as interim executive director while we figured out what we wanted our new leadership structure to be. The transition took time, which makes sense with the many crises rocking the world and the need to engage in intensive collective learning and reflection across all our staff and board.

OK, so let’s start with what you are truly curious about: where did we land?

I’m thrilled to announce that we have four brilliant co-executive directors stepping into leadership. Each of them will devote a portion of their time to executive leadership responsibilities, while the rest of their time is devoted to working directly with our partners and communities. You can learn more about these brilliant folks by checking out their bios. Here’s what their roles will entail:

What a bunch of rockstars! I am thrilled they’ve chosen to step into new forms of leadership at RVC. We’ll slowly transition into this structure over the next six months, with Chris, Roshni, and I serving as co-executive directors starting in August, and by January 2022 these four wonderful human beings will all be co-executive directors.

What does this mean in practice?

Take a look at that list again. Do you see all the usual executive director things that are NOT in there? Nobody is the director of programs – the programs are running themselves and coordinating directly with one another. Nobody is the human resources director – our brilliant operations manager, Fabiola Arvizu, is the decision-maker regarding HR policies and processes. And while Anbar is in charge of our organization-wide budget, that’s mainly a coordination role; each program sets their own budget.

It’s more complicated than this brief outline; each co-executive director has additional realms of involvement to help weave the threads together across the organization. But crucially, the realms of power they hold are limited. In addition, the soon-to-be-co-executive-directors who are currently program directors are actually transitioning out of these roles, which offers opportunities for other staff to step into new forms of leadership.

This is distributed leadership: a thoughtful, clear mapping of power, where folks can understand exactly who holds what forms of decision making and responsibility across the organization, and where there is not an excessive amount of power held by any one person in the system. We’ve also been doing all-staff trainings with Isabelle Moses on liberatory power, as laid out in Cyndi Suarez’s book The Power Manual, which has helped all of us move from a power-over to a power-with mentality.

Transitioning to this new structure takes time! For these staff to make time for these new responsibilities, we have to shift responsibilities for other staff, and hire new staff so we continue to maintain a healthy work/life balance for everyone. (Side note: come work at RVC! We’re magical.)

How did we figure out this new structure?

While we could hire externally, the magic of RVC is the intensive work we’ve done to undo so much of how nonprofits are “normally” run. In the words of former CompassPoint Co-Director Lupe Poblano, we are “attempting to create a liberatory bubble within the nonprofit industrial complex.”

It takes time to reach out to our community stakeholders to have deep feedback conversations and build trusting relationships that ensure staff will consent to putting crucially important decisions in your hands. So, when Vu was departing, our full staff talked about what structures they would like to see at RVC, and settled on one that increasingly distributes ED responsibilities. Then we reached out to other organizations experimenting with distributed leadership, and outlined a structure where executive responsibilities were divided four ways. This proposal factored in conversations with all 20+ RVC staff about what they loved doing and where they wanted to grow, and at the end of which, four staff said they were interested in taking on organization-wide responsibilities. They were also willing to take on the title of “Co-Executive Director,” which is quite a big ask given the way the rest of the world interprets that title (and all the burdens therein).

Next, with the aid of our talented consultant, Kad Smith, the four staff members interested in executive leadership decided, together, how to distribute responsibilities among themselves, with feedback from the rest of our staff. (It helped that this is the same process we use in all our teams at RVC to regularly reassess roles and adjust who does what! We’re getting pretty good at this collaborative approach to work distribution.)

We then took this proposed new structure and shared it with all our staff and our board using the Consent Principle decision-making tool, which was an excellent way to surface important priorities during this leadership transition: building effective conflict resolution tools and ensuring we center pro-Blackness. With the enthusiastic consent of our staff and board, we’re moving forward!

Yes, I’m not part of the new executive director structure

OK y’all, this entire time I’ve been telling you that I had zero interest in becoming the next ED of RVC. But somehow you’re still surprised that I’m not part of this new structure. Let’s let go of this tired “heir apparent” mentality to leadership transition. I’ve had the honor of being “at the helm” for over five years! Looking back, it still boggles my mind that I played a crucial role in growing RVC from a $500,000 nonprofit with five staff to a $3,000,000 nonprofit with over 20 staff, and that I supported our transition from a traditional nonprofit to a badass self-managing organization. Now I’m ready to provide space for others to grow, supporting the many innovative BIPOC leaders at RVC, who are more than ready to take our work to the next level.

And we need you!

Chris would be heartbroken if I didn’t conclude this update by asking you all to donate today to show your support of this new leadership structure. Let’s prove all those naysayers wrong, who act like leadership transition is this Awful Thing that funders need to Wait And See before giving any money to new leaders. If you like what we’re doing, and you’re learning from us, please toss some money our way today.

We are so excited to share this new chapter with you, and are committed to continuing to learn out loud. Be sure to subscribe to our newsletter so that you can stay up to date on our continued adventures.