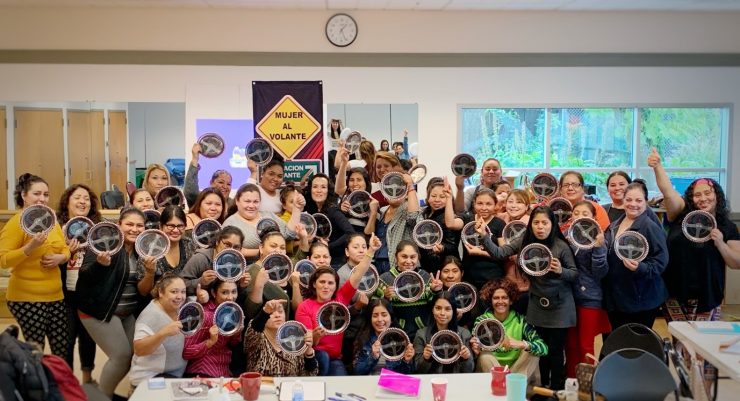 Mujer al Volante, Superacion Constante (MAV), which translates to “Women Driving, Women Advancing,” is the first program within Seattle’s Latinx community that encourages and supports women to learn how to drive. The aim, effectively, is two-fold. The program envisions helping Latina women and families gain confidence and reach a level of independence so they can ultimately self-advocate, for themselves and their families, by engaging with communities.

“First and foremost, the goal is to empower low-income immigrant Latina women and mothers, and to promote community engagement and leadership,” said Jacqueline Garcia, Executive Director of MAV.

However, building off her pragmatic approach has not been easy for Jacqueline. She explains, “As a grassroots organization, we struggle with the lack of response from other government agencies, bigger nonprofits, and agencies.”

This means that in addition to her duties as a Founder and Executive Director, Jacqueline was spending too much of her time writing proposals and administering the funding. The administrative tasks, due to the unresponsiveness from other groups, was proving to be incredibly difficult for the program to take full effect.

Jacqueline explains, “Our approach is practical, but the impact is significant. We teach participants what they need to know to secure their driver’s permits, which then leads to an independence that allows them to support their families financially and emotionally, and opens doors for them to actively engage in their communities.”

To fulfill their mission, the program aims to identify issues and roadblocks that many of these women face, whether it’s finances, social dynamics, or family issues.

The program, for example, have held a series of classes to help women, and men, to assist in passing the written exam in obtaining a driver’s license.

To go even further, they have held information meetings for voters interested in knowing how to fill out ballots and how different levels of government work, from local to federal. They, through social media, promote training classes on how to respond to mental health crisis. Hosting and promoting these types of meetings stem from a belief that MAV embraces: an informed community is a stronger community.

The effectiveness of partnerships

RVC teamed up with MAV as an Operations Support Program partner. RVC, through this program, provides back-office and administrative support in order to help manage their workload, so Jacqueline and MAV can focus their attention on uplifting the Latinx community.

“Since minute one, RVC opened the door for us to learn more about our work,” states Jacqueline. With the back-office support, she states that she can put her effort to develop strategic relationships, build partnerships, and plan for MAV’s future. “RVC is very respectful with our work, as we had experiences where more established and bigger nonprofits took credit of the grassroots’ work. RVC is totally oriented to help you grow and develop your own brand and leadership.”

Building for the future

With RVC’s help, Jacqueline states that they became eligible to get funding to implement MAV’s program. Building off the momentum, MAV started a workshop series this summer, which launched on June 23 in Kent.

“After a break, we are ready to come back and serve the community through the program, called ‘Taking the wheel of your life,’ a renewed series to prepare women to pass the knowledge test and get a driving permit,” states Jacqueline. What makes MAV such a special and critical program is that it is unique and original in its approach to advocate for the Latinx community, as it’s not a topic that gets talked about often.

Despite the successes of MAV and its programming, Jacqueline and her organization is continuing their hard work in bolstering their scope to further serve communities. “We will continue to look for funding to build capacity and expand our services. Our program is very unique and we are looking to establish new and fair partnerships and collaborations.”

For more information about Mujer al Volante, check out their Facebook page!