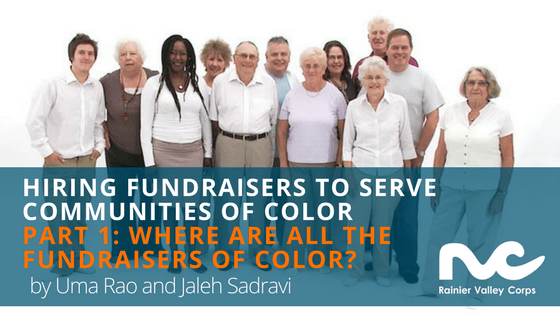 Last month, we released a blog post about hiring white folks to serve communities of color, which resulted in lots and lots of comments from many of you–thank you for engaging with us on this! Many of you had incredible insights and some had more questions, such as one that can be summarized to something like this: ‘I agree with you, but what do we do when we are hiring fundraising positions, and there are so few candidates of color (if any)?’

We completely hear this concern and it’s a true story. Many of our leaders who serve communities of color look for development staff and struggle to find qualified candidates, much less diverse candidates/candidates from the communities they serve. Even the Association of Fundraising Professionals has identified Diversity and Inclusion in the fundraising profession as a key strategic direction for their organization. According to their 2016 Diversity and Inclusion report, there is a lack of information on how many fundraisers of color there are nation-wide.They released a survey in 2015 asking participants (96% of whom were professional fundraisers) to gauge based on their knowledge of the sector,  “In your professional opinion/observation, how has the number of ethnically diverse fundraisers changed since 2001?” About a third (37%) of those responding said they think the number has increased, 4% felt it has decreased and 59% felt it has stayed about the same. “The question of numbers is one we will continue to explore,” they state. I hope this means we will get some more precise statistics on how many people of color are fundraisers (in the US), and continue to explore other questions in this report in relation to people of color, such as the conditions that are challenging, and how to make them more beneficial for the long-term tenure of fundraisers.

In any case, this tells us that in the last 15+ years, the demographics of nonprofit fundraisers hasn’t changed much, and likely that includes many demographic factors, but let’s focus on race. There is much more to say here, especially when we talk about leadership positions (e.g. Development Directors and Executive Directors). The Building Movement Project recently released a report on the racial gap in nonprofit leadership. From a survey of over 4,000 participants they conclude that people of color are rising in numbers in the nonprofit sector, do not lack qualifications or experience to take on leadership positions, and in fact are more interested in leadership positions than their white counterparts; however, in the last 15+ years, the number of executives that are people of color remains under 20%.

We’re getting ahead of ourselves, as there is really so much to say about why the fundraising profession is a challenging one, and what it might take to help fundraisers succeed both in terms of successfully raising money and in acquiring and thriving in leadership positions. We will pull from more formal and informal research and we will start to address all of this in a series, “Hiring Fundraisers to Serve Communities of Color”. For this series, we want to focus on what it might take to successfully hire and support a fundraiser raising resources to serve communities of color, including accounting for (and regardless of) racial identity. Let’s start with the statement: there aren’t many fundraisers of color. Given that is true, in this first post we want to focus on why we think that is true.

So, why are people of color hesitant to fundraise?

“I think it’s threefold: One – lack of awareness about the profession; Two – those who are aware conceptualize philanthropy as something that is beyond their grasp or out of their reach and/or they see it as begging for money from rich people so it’s generally just not that appealing of a career, and Three – I think the ‘good old boy’ network that persists in fundraising regarding development leadership limits hiring managers’ ability to feel connected to or see potential fit in fundraisers of color.” – Jera Oliver, Associate Director of Development Ohio State University

Fundraising is relational, more specifically relational to donors. When we asked several local Executive Directors & Development Directors who the majority of their individual donors are, the response was overwhelmingly, “white and male”. This 2015 report from Blackbaud confirms this by saying that “the demographic picture of the donor universe looks more like the racial and ethnic makeup of America in 1990 than that of America today”, with 73% of donors being White, followed by the next largest racial group being 11% “Hispanics”, 9% African Americans, and 5% Asians. An important distinction we want to make, though is that while the majority of donors in numbers are white, according to Giving USA, people of color households are more likely to give than white people, as it is more culturally common to people of color.

So why are the majority of donors overwhelmingly white? Well, the United States has a significant racial wealth divide that started many, many years ago with the federal government’s assistance and regulations for white people to acquire property, limiting other races’ abilities and creating what we now call our middle and upper middle class–it was and continues to be mostly white. At current growth rates, it would take black Americans 228 years to have as much wealth as white Americans have today; the wealthiest 1% own 40% of the nation’s wealth and the bottom 80% own 7%.

Let’s come back to the fundraising profession: “Fundraisers can be so focused on accessing wealth that they do not pay enough attention to the inequality that shapes the distribution of wealth,” says Dr Maureen Emerson Feit, Director of the Nonprofit Leadership program at Seattle University. “The pressure to establish and maintain access is real. Organizations often expect fundraisers to take primary responsibility for bringing in new forms of wealth and capital and sustaining a pipeline of support that keeps the doors open.”

Given this picture, it is no surprise that the majority of fundraisers–those who access wealth for nonprofits–are white, and they work with white donors. The dynamics of race and class play out in conversations about money, and to ignore these dynamics would be naive. These dynamics don’t just dictate who becomes a fundraiser, but it also dictates how people hire for fundraisers. One executive who is a woman of color told me that she hires white people for her development team, because “I want them to reflect our donor base which is largely white between the ages of 28-48”. She has also told horrific stories of being in ask meetings where she as the CEO is ignored and her development staff who are white are directly spoken to and regarded with more attention. Stories like this are plenty–we will explore this more in another blog post.

For now, we also want to draw your attention to this amazing story, from the Grassroots Fundraising Journal. It features the Community Coalition in South Los Angeles and how they re-thought their fundraising strategy to de-centralize major donors/wealthy donors and rather build a membership model. They say, “In establishing a membership program, the organization has also undergone a practice of understanding how race and class dynamics contribute to social decision-making. This practice not only prepares staff for their work as community organizers, but also helps them become better fundraisers.”

Strategy aside, we bring this to your attention because we believe that this is the heart of it, for any fundraiser. Regardless of your race, as a fundraiser we believe that you have to come to terms with your own money story. What is your money story? It is the root of/a collection of memories, messages, beliefs and practices that have developed over time to dictate your behavior and feelings about money. Why are many people of color “scared” to raise money? Probably because growing up, scarcity of money led to a fear of confronting it directly. Similarly, why are many wealthy white people afraid to raise money? Probably because they were taught not to discuss money when they were growing up, which doesn’t lead to ease in fundraising as adults. Whether you grew up with very little money or too much money, regardless of your race, you are carrying baggage around money. We all are, you are not alone. Asking for money will always include power dynamics and it will always be challenging. Come to terms with your money story, and we guarantee you it will get easier over time.

To the nonprofit professionals who are people of color: It’s time to let go of this baggage and start owning the power that comes from confronting money directly. We urge you to consider becoming fundraisers. The development department of a nonprofit organization holds a lot of power; the development director is viewed as a key leader in the organization and is integrally involved in organizational strategy and planning on many different levels. Not only are you raising funds to support the programming and operations of the organization, you are building trust within the community and building partnerships with people at all economic levels.

As fundraisers, you have access to people with money and the ability to direct funds toward your communities. You also have the opportunity to develop relationships with key decision makers at foundations and corporations.  This access that comes from relationships with wealthy people shouldn’t be limited to white folks. Your voice and your perspective as a person of color making an ask is truly important. Mostly, donors and funders are attracted to causes they feel passionately about and they want to engage in deep, rich conversations about those communities, in addition to the transactional conversations about how big their gift will be that day. You, as people who come from the communities that are being served, are in the unique position to provide this perspective. You are most connected to those on the ground doing this work, and you can tell these stories with confidence and authenticity.  This is hugely valuable to furthering missions that serve communities of color.

None of what we are saying is easy. It isn’t easy to let go of money messages, fear, scarcity mentalities, shame, and the 80+ other emotions that might come into play when it comes to our feelings about asking for money. The reality is, fundraising is 90% emotions and 10% skills. Anyone can learn these skills and there are lots of trainings to help you with that. The harder part is moving through your emotions. We will be featuring some stories of fundraisers who have moved through these emotions and can offer insight for you (Part 2). We will also offer suggestions on hiring and supporting fundraisers to serve communities of color, regardless of their race (Part 3).

We want to ask for your help as we work on this series:

Do you know of great resources to support fundraisers of color?

Are you a fundraiser of color, and do you have stories to tell of your experiences making asks?

Are you leading a community-based organization that serves communities of color, and are you often hiring for fundraising positions? What are your frustrations or concerns?

Contact us at [email protected], we want to talk to you!

Sign up for RVC’s mailing list and get the latest news. Don’t worry, we won’t email too often. You can also sign up to follow RVC’s blog by email. Enter your email address below and get notice of awesome new posts each Wednesday morning. Unsubscribe anytime.